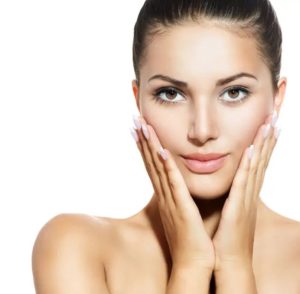 As patients notice areas of deflation, some may consider fillers or fat grafting. Fillers are temporary and need to be injected throughout one’s life. Fat grafts can be maintained within the grafted site without being significantly resorbed, but as the aging process continues, the grafted fat descends. This leads to a heavy, full, and unnaturally descended face. Furthermore, fillers and fat grafting do not correct the descended region of the face and therefore do not correct the aged facial shape.

There are unique features of faces that need to be considered when performing facial rejuvenation surgery:
Typical facelift techniques applied to the face lead to:

There are three main regions where the aging process affects the face. These regions are the area below the lower eyelid (including the cheek and between the cheek and nose), the jowls (jaw region), and the neck. The aging process affects these regions because the muscles that support the soft tissue and skin of these area are supported by one continuous muscle layer.

After surgery, the original facial form is regained to achieve a youthful, beautiful face that appears natural.

In order to correct the aging face, facial rejuvenation surgery must re-elevate this continuous layer of muscle back to the original region. By relocating the region below the lower eyelid, jowls, and the neck simultaneously, the descended region moves as a unit in a harmonious fashion. In addition, by dissecting the descended region, thicker skin and connective tissue is relocated rather than pulled. Therefore, the patient does not exhibit a pulled appearance of the face. Lastly, since tension is placed on the deeper muscle layer rather than on the skin at the incision site, the incision site heals remarkably well. Also, because the descended region is relocated rather than pulled, the effect of the surgery is longer lasting than other facelift techniques.

Typical facelift procedures utilize some sort of muscle pull. This is done by putting threads or some sort of fixation device such as Endotine. These results last a year or so as the muscle of the face, Superficial Muscular Aponeurotic System (SMAS), is not dissected and released. The next kind of muscle pull is facial muscle (SMAS) pull. SMAS muscle dissection and muscle pull lasts longer than thread lift or Endotine fixation but still does not last more than a few years.

The reason for these facelift procedures not lasting a long time is that the muscle is not fully released.

Dissection under the SMAS muscle and pulling the muscle creates a pulled look. This is because the muscle distally (further way from the incision) is not fully released. This muscle retention further away holds the facial muscle in place and creates a pivot where the muscle is pulled. Consequently, this stretching of the muscle gives off a pulled look. In addition, the direction of the muscle pull is more horizontal rather than vertical as the retained distal muscle prevents a more vertical lift. Therefore, the face appears wide.

This may be beneficial for some Caucasian faces with narrow faces, but for Asians with wide faces, this will lead to wider faces. Furthermore, SMAS facelift does not effectively correct the jowl and, therefore, does not create a smooth, slender, V-shape jawline.

SMAS lift pulls the jowl backward toward the incision at the ear. This can improve the jowl but gives a wider jaw line as the skin, fat, and the muscle is pulled toward the incision (laterally/outward) which is along the ear. Lastly, because the SMAS muscle pull facelift does not correct the neck muscle (platysma), a separate incision is sometimes made on the chin to correct the neck wrinkles and bands. However, the neck muscle (platysma) and the SMAS muscle is the same continuous layer. They are joined in this same plane at the jawline region.

Contrary to muscle older anatomic text books, recent anatomic studies demonstrates that platysma muscle extends up to the face as they are joined with the SMAS. Therefore, by making an incision on the neck and tightening the neck centrally pulls the platysma muscle in the opposite direction from the SMAS pull. So in patients with aging neck, SMAS facelift will pull the SMAS laterally (outwardly) while the central neck incision will pull the neck centrally (inwardly). This will oppose one another’s pull and the jaw line will not improve because of this opposing effect. Therefore, patients undergoing SMAS facelift technique will either not undergo neck wrinkle / band correction or if the neck is corrected with chin/neck incision, then jaw line will not be effectively corrected.

Muscle release facelift surgery is fundamentally different, in that the muscle is not simply dissected, but the facial muscles are fully released.

An Expert on Facial Rejuvenation Surgery

My understanding of the minor retaining ligaments came about from my studies at different parts of the world and racial differences and inter-racial patients.

It was when I went to Brazil (A country with most mix races) where I was able to study mix races of Caucasians, Indigenous Brazilians, Asians, and Blacks mixed in various ways. By studying their tissue firmness and their non-major retaining ligament strengths, I was able to discover the key minor retaining ligaments holding the facial muscle from being fully released.

We cannot correct what we do not know. By knowing these key minor retaining ligaments, facial muscle release and relocation technique became possible.

The release of the minor retaining ligaments requires supreme precision. This type of uber precision requires that the tissue separation occurs split second before the surgeon dissects the tissue. This can only happen when surgery is performed in the perfect natural tissue plane. Because our tissues are formed in layers, by following this tissue plane will allow the surgeon to naturally elevate the tissue without tissue damage or much bleeding.

Using an analogy, an airplane will stay within a jet stream during a flight.  If the airplane goes in and out of the jet stream, then turbulence (or in this case, trauma) will occur. This clean dissection avoids damage to motor nerves that control muscle movement and allows for a faster recovery.

You can see the precision by minimal facial bleeding postoperatively in our facelift videos.

There is no tension distally that is holding the face.

By fully releasing the facial muscles, the entire face can be relocated in a continuous fashion. Therefore, the face does not look pulled and we can achieve the more vertical elevation than the traditional SMAS facelift. And since the facial muscles are not held back distally, this gives the most long-lasting facial rejuvenation result possible. The only thing that will cause the face to age is continuous gravity and collagen weakness that comes with age. Therefore, if patient desires further facelift procedure much later, they can undergo the same procedure again through this natural tissue plane described above.

Any form of muscle pulling gives a pulled appearance and the effectiveness is limited by the retaining ligaments holding the muscle distally. And the jawline correction is inadequate and thus does not produce the optimal V-line. However, muscle relocations facelift fully releases the facial muscles and reposition the facial muscle at its optimal, natural state. Therefore, the face looks natural and slender. This gives the most effective V-line of the jaw and simultaneously corrects the neck as the facial muscle and the neck muscles are harmoniously repositioned without tension. And since there is minimal tension at the incision site, the skin incision heals remarkably well.

After surgery, patients return home or to the hotel (for out-of-town patients) without experiencing much discomfort. Most patients do not take any pain medications after surgery. Few patients may take Tylenol. The patient may resume light activity (no strenuous exercise) the following day. The sutures are removed after 1 week and the patient can expect to return to work 1 week after surgery. Swelling and bruising are minimized by performing the surgery at a minimally vascular surgical plane in a hydrated state so that the tissue is in a physiologic moist condition.

Identifying and operating at this surgical tissue plane optimizes recovery and the aesthetic effect.

" I had the most wonderful experience with Dr. Kim and his staff for my double eyelid surgery. Every member of the office staff I encountered was extremely organized and professional. I am so happy about my experience and strongly recommend Dr. Kim with no reservations."
Sarah H.
" It’s been a few months after my surgery and my eyes are looking fabulous! My eyes look a lot more awake and bright eyed yet still very natural. I like the fact that I don’t need much make up at all to make my eyes look bigger. I can’t thank Dr. Kim enough for my beautiful new eyes!"
Lindsey L.
" I was super nervous as this was my first time getting surgery of any sorts. Dr. Kim was really patient and attentive during my consultation and just seemed to know exactly what kind of look I wanted. Afterwards, I was so excited to get this procedure done!"
Jenny C.
" Best choice I ever made having my double eye lid surgery done with Dr. Kim. The results are exactly what I wanted and the whole process itself was smooth and painless. Thank you Dr. Kim and your wonderful staff for taking such great care of me!!"
Emily Y.
See More
Contact Us